The world first prototype hardware as a Proof-of-Concept (PoC) of mmWave integrated Heterogeneous Networks (HetNet) for 5G has been developed through MiWEBA project with nine international collaboration partners [1].

The concept of mmWave integrated HetNet is shown in Fig. 1, where many numbers of mmWave small cells are overlaid on the current macro cell. A novel system architecture of Control-plane (CP) / User-plane (UP) splitting is introduced, where mmWave small cells transfer the UP with ultra-high data rate while the macro cell maintains the CP to perform mobility management of all users to realize centralized radio resource management. 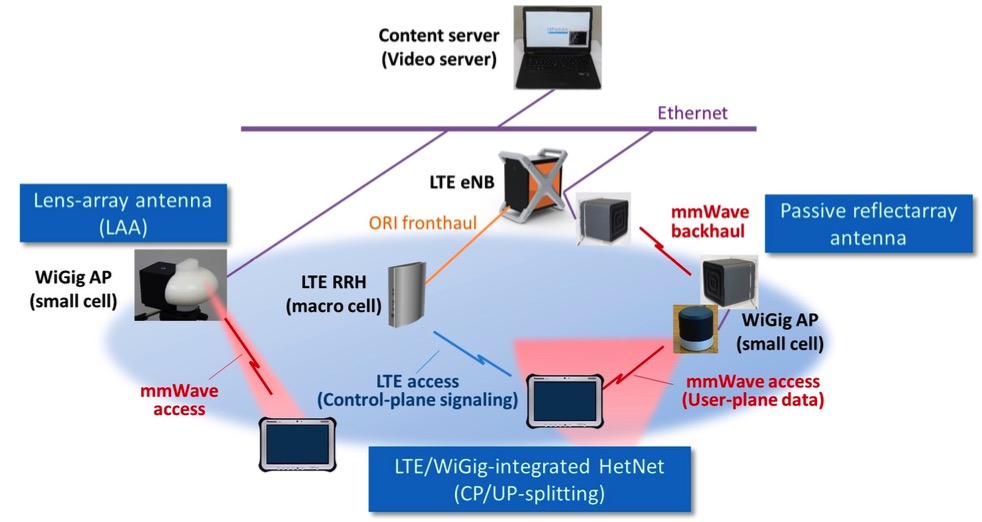 The PoC hardware for the mmWave integrated HetNet is comprised of an LTE eNB as the macro cell and WiGig APs as the mmWave small cells. Figure 2 describes overall system architecture of the PoC, and corresponding photo is shown in Fig. 3. The developed UE supports dual connectivity using 2 GHz LTE and 60 GHz WiGig accesses, while the CP is stuck with 2 GHz LTE and the LTE eNB manages the UP data switching between the LTE and WiGig. The PoC hardware includes both the backhaul and access using 60 GHz band. IP-based wireless backhaul linking was established using a passive reflect array antenna, while adaptive beamforming antenna with lens was used to support access for mobile users.

One typical application on this PoC is “Context Aware Caching”. In the demo, the client runs a video streaming application while on the move. A context aware cache entity, lying as a middle layer between the video application and the network connection, performs the data requests, using the connectivity status (mmWave connection available or unavailable) as context information. When within the coverage of an mmWave small cell, the cache pre-fetches and stores the video file chunks locally at the maximum achievable rate of more than 2.5 Gbps.